We don’t want to alarm you, but today is November 25. Just let that sink in – November. 25. With one incredibly busy month ahead of us in the lead up to Christmas, we thought we should stop and reflect on the month that has been. October boasted a cavalcade of openings, from a retro Italian restaurant to a heritage-listed brasserie housed in an old bank. Been too busy to check in on Brisbane’s dining scene lately? Here is a quick round-up of the best new Brisbane restaurants, bars and cafes of the month. Banc Brasserie & Wine Bar, Brisbane City
One of Brisbane’s most striking heritage landmarks, the Bank of New South Wales Building on Queen Street, has undergone an exciting interior transformation. Gone are the cashier windows and coin-counting machines of its former life – instead you will find crisp white tablecloths, gleaming tableware, modern chandeliers, cushy furnishings and opulent surrounds. It is now home to elegant eatery and sipping spot Banc Brasserie & Wine Bar, which is shaking up the gastronomic paradigm with a menu that accents familiar bistro fare with native ingredients and other far-reaching culinary influences. The Hogg & Lamb-designed space is split into three distinct sections – brasserie, bistro and wine bar – with combined capacity of roughly 160 patrons. Banc’s launch menu kicks off with morsels such as house-cured hay-smoked salmon served with fresh fruits and pickles, Moreton Bay bug tagliatelle with chilli and marjoram, lamb racks served with eggplant, onion, kombu and cavelo nero, and the classic steak frites, which will boast a rotating cut of beef from week to week. Sips can be selected from a thick wine list featuring Australian, international and high-end Coravin drops, as well as a curation of signature cocktails. Revel Rivermakers Restaurant, Morningside
Earlier this month, Bulimba-born beer outfit Revel Brewing Co. officially unveiled its long-awaited Morningside expansion, Revel Rivermakers Restaurant. Occupying one of Brisbane’s most storied heritage sites, the Commonwealth Acetate of Lime factory in the Rivermakers business hub, the eatery marks an exciting new chapter for the frothie brand, which is tapping into the location’s history as a brewing hub and giving it new life as a contemporary eatery and production site. A new 35-hectolitre, four-vessel steam-powered brewing system has been built on site and the Revel Rivermakers brewing team has been hard at work concocting beers on site for 12 months already, producing more than double the output of Oxford Street’s 200,000-litre capacity. The team has made some tweaks to its core beers, rebranding and expanding the range (now all available in their own fully printed cans) to include six skews including Revel’s classic pale ale, session ale, lager and IPA, plus newly added XPA and hazy IPA brews. The brewing of beer, however, isn’t the only thing the Revel team is undertaking in Morningside. As the venue’s name attests, Revel Rivermakers Restaurant also boasts an eatery for punters to savour sublime fare while quaffing a beer or two. Expect sharable eats such as polenta fries, frickles (fried pickles), a range of burgers, pan-fried barra and classic parmigianas, which can be enjoyed indoors or beneath the festoon lights in the breezy outdoor space. It’s Still A Secret, South Brisbane
Fans of Woolloongabba’s vintage-inspired bar and live-music venue Can You Keep A Secret will be pleased to know that they now have a second not-so-secret spot to enjoy a tipple or two. Owner and operator Emily Jane spent the better part of the last five months orchestrating the revitalisation of the stately 130-year-old heritage-listed Coronation Hotel building on the corner of Montague Road and Hope Street, transforming it into live-music venue and bar It’s Still A Secret. Emily has outdone herself once again, applying a sense of nostalgia-inducing and homely flamboyance across various nooks and corners. An assemblage of quirky curious, eye-catching artworks and vintage furniture comprise the venue’s eclectic-yet-lived in aesthetic, from the patterned couches and wallpaper to the macrame hangings and timber panelling. Kitchen renovations continue in the space, but once complete you can expect a range of small and sharable bites, potentially drawing upon the venue’s 1970s aesthetic as a key influence. As for the drinks, there is a strong emphasis on non-alcoholic options for the temperance crowd, with booze-free sips available alongside stiffer stuff like cocktails, craft beers and vino that you won’t readily find at your local bottle shop. When it comes to the music, Emily’s booking style follows a genre-less curatorial ethos focused around giving love to original acts and vinyl DJs, with some form of entertainment planned for every night of operation. 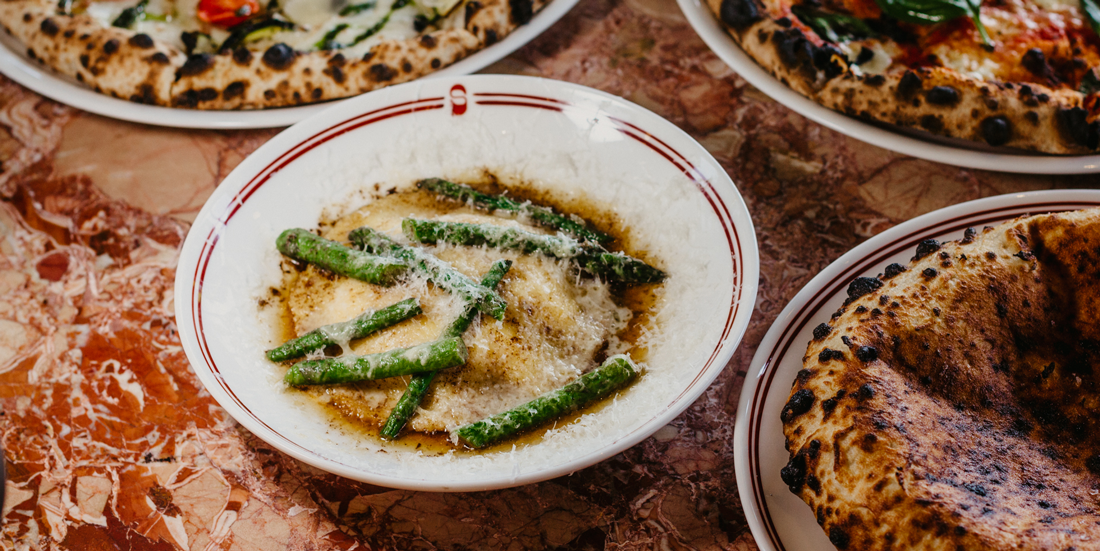 Sasso Italiano, Woolloongabba
Many of the Italian-American eateries that proliferated across the USA in the 60s and 70s remain enduring culinary icons. These neighbourhood trattorias evolved into community institutions, creating a legacy of hospitality that continues to inspire successive generations of epicurean entrepreneurs. The owners of Woolloongabba’s new eatery Sasso Italiano count themselves among the new breed of operators blending this old-school approach with a touch of contemporary chic. Although touted as an old-school trattoria, Sasso Italiano looks to evoke the spirit and soul of those eateries, rather than replicate the exact look and feel. Inside, guests are greeted by warm materiality, from the paved stone floors (sasso means stone in Italian), pink marble bar top, rendered-concrete walls and timber wainscoting, as well as softening accents like the abundance of curved edges, plush upholstery on the banquettes and chairs, pops of greenery, rippled glass and a mirrored back bar. The menu is an ode to unctuous family-style Italian cuisine and the epicurean ecstasy of dining with one’s nearest and dearest. Expect a menu of trattoria-style nosh, which encompasses snacks, antipasti, pizza (cooked in a Marana Forni woodfire oven with a deck wrought from Mount Vesuvius lava stone), pasta, mains and dessert. Early front-runner favourites include the gnocco fritto (with parma prosciutto, parmesan and honey dressing), the ricotta-and-yolk-filled raviolone and the pancetta, potato and ‘nduja crowned calabria pizza. When it comes to sips it would be remiss not to mention the negroni menu, which features ten riffs on the iconic drink as well as a selection of exclusive variations concocted from spirits made in the 60s, 70s, 80s, 90s and 2000s. Rothwell’s Bar & Grill, Brisbane City
It may have just opened this week, but it has already proved worthy of our list of November’s most exciting openings. Rothwell’s Bar & Grill opened on Edward Street on Tuesday November 23 and immediately turned heads with its well-dressed interior and menu of sumptuous European-tinged bistro fare. It’s no wonder that this opening is causing a stir – it’s the result of a partnership between Dan Clark, the owner of 1889 Enoteca, and Ben Russell, the former head chef of Aria Brisbane. Rothwell’s channels the polished aesthetics, percipient service and high-end culinary craftsmanship of venues like The Savoy Grill in London, Piccadilly’s The Wolseley, Balthazar in New York City, or storied Los Angeles bistro The Musso & Frank Grill, bringing a big-city brasserie experience to the heart of Brisbane. A material palette of marble, timber, leather, copper and brass has been applied across the space, with a sense of contemporary glamour afforded by exquisite accents like the fluted marble encasing the raw bar at the heart of the dining room, luminous chandeliers that hang from the ceiling, cushy green-leather booths, polished mirrors and artwork from notable Australian painters like Sidney Nolan and Jeff Makin. In the kitchen, Ben is putting his talents towards creating a menu that delivers quintessential bistro fare with some Mediterranean accents. Guests can work their way through a steady procession of well-executed classics, such as steak tartare, niçoise salad, potato gnocchi with blue cheese sauce, walnuts and celery leaf, five kinds of steak and Rothwell’s signature beef Wellington, a technically impressive piece of culinary construction that feeds two. Dan has relished the opportunity to curate Rothwell’s wine list, which boasts a curated short list of the 2000-bottle cellar, from budget-friendly bottles to high-roller drops. When it comes to cocktails, Rothwell’s sticks strictly to the classics – a nine-strong selection features a martini (served on a silver platter with an iced carafe for top-ups), a gibson, a negroni, a Manhattan, an old fashioned and a Hemingway daiquiri, to name a few.

Many more restaurants, cafes and bars opened this month. You can have a browse through the latest foodie happenings by clicking here.

Published on 25 Nov 2021 by Chrisanthi Demos